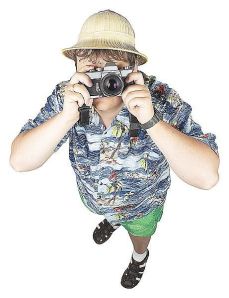 The Tourist Trap
Local history shouldn’t be wasted on visitors.

City dwellers have a love-hate relationship with tourists. The two key positives are:
A) Their presence reassures urbanites that they live in a place so cool that other people choose to vacation there, and;
B) Tourists spend lots of money.

The negatives include sidewalk-clogging, undertipping and a manner of dress that makes East Coast elites feel even more superior. Of course, a resident’s biggest fear is to be seen as a tourist, effectively being branded as an outsider. The Dutch used to drape unfaithful women with snakes and parade them through the streets of Amsterdam. That’s probably what it’s like being caught taking a trolley tour.

Fear and shame mean that many Bostonians’ knowledge of their heritage ends with foggy memories of high school history class. But an out-of-town guest is an opportunity for a refresher course. My girlfriend had visitors, a newly married Texan couple, so for two days we whirled through the city. I’d say I went through the gauntlet so you don’t have to, but, at some point, you should. Just don’t start at Cheers.

“You should have no inherent reason to go here,” said the confused husband, watching young foreigners snap photos by the bar’s entrance. Cheers went off the air 18 years ago, so I couldn’t actually explain the appeal of Sam Malone bobbleheads or headshots of a sassy Shelley Long. I doubt WKRP in Cincinnati is flooded with sightseers. Perhaps the crowds are drawn by the enduring sex appeal of Kirstie Alley.

Tougher explanations continued across the street, though I bet most conversations about the Swan Boats go this way:

Husband: So you don’t go anywhere?
Me: Nope.
Husband: And you don’t row or paddle or anything?
Me: No, only the dude in the back.
Husband: Poor bastard.

Once we hit the Freedom Trail, things got more educational. We visited the final resting places of Samuel Adams and Mother Goose at the Granary Burying Ground, or, as I had previously known it, that creepy graveyard by the Beantown Pub.

Down the block sits the Omni Parker House Hotel, home of the three most interesting pieces of Boston trivia that I know, and that I repeat at every opportunity: Malcolm X was a bellman there, Ho Chi Minh was a baker, and it’s the birthplace of Boston Cream Pie. We stopped in for a taste in a gift shop full of “Pahk the Cah in Hahvad Yahd” T-shirts. I learned that I prefer the Dunkin’ Donuts version, which I think actually makes me a more authentic local.

The search for trivia continued after a brief stop at what our guests referred to as “Nathaniel Hall.” There’s not a whole lot to grab your attention—they have Gaps in Houston—but we did see two separate buskers playing pan flutes, which provided a haunting soundtrack for our walk to the Union Oyster House.

Over pints of local beer, we learned that the restaurant played host to the first recorded use of the toothpick. King-to-be Louis Phillipe lived upstairs tutoring, and probably bedding, the neighborhood girls. Heady stuff.

From there we hit the North End, passing my least favorite attraction, Paul Revere’s house—he lived there for seven years; it’s like visiting where John Hancock bought his quills—and stopping at my favorite, the Old North Church. They say the crypt is stacked with dead redcoats. As a neighbor who believes in ghosts, that’s frightening to hear.

I’ve visited lots of cities in my time and retained very little information. But after our weekend tour, my daily commute is enriched. In the Back Bay, I’m now reminded of Zabdiel Boylston, who fought smallpox. When I pass Gilbert Stuart’s gravestone on the Common, I know that he painted the portrait on the dollar bill, and is surrounded by dead British soldiers (they’re everywhere, it’s terrifying). Like youth wasted on the young, local history is often wasted on Midwesterners. I’m not saying you wait in line for an hour for a cannoli from Mike’s Pastry, but it might not hurt to brush up on the Battle of Bunker Hill. At the very least, you’ll have an alternative should your old college roommate want to sit on Norm’s barstool.