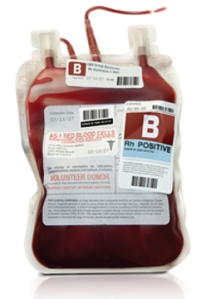 There was a blood drive next to my apartment, and, as always, I passed by with no small sense of guilt and regret. I know the statistic: Area hospitals need thousands of pints just to meet daily needs. And I know the slogan, “Have you saved a life today?” Both appeal to my desire to feel heroic. I’m just hamstrung by something far more basic.

I have a problem with blood. On a first-grade field trip to the hospital, a towering fridge of the stuff knocked me on my OshKosh B’Goshes. Later, athletics was my excuse, but after hanging up my cleats (and apparently forgetting my past), I was first in line to donate. Didn’t even make it past the finger prick. With my head between my legs and a wet towel on my neck, I thought, “I’m the son, grandson and great-grandson of doctors,” “This shouldn’t be happening,” and “Can I still get the free pizza?”

Fear is the wrong word, because it’s inaccurate, and it makes me look bad. Giant spiders are scary, and every part of me believes as much. But with blood, my systems shut down involuntarily, even as my inner voice shouts like Gunnery Sergeant Hartman: “What is your major malfunction, numbnuts?”

Resolved to find out, I turned to renowned Harvard psychology professor Steven Pinker. In an email carefully worded to blend obsequiousness with the fact that I’m a big, brave boy, I explained my predicament. “Your reaction is common,” Pinker responded. “My understanding is that this is a reflex that probably evolved to help stanch one’s own bleeding: If you see blood on or close to your body, your body suddenly reduces your blood pressure, which means less blood gushes out of one’s wound.” Meaning my body has a highly-tuned defense system, which is extremely badass. Could a mantra help keep me focused? “I don’t know about mantras,” Pinker wrote. “I look away and try to think about something else, which seems to work passably.” Not what I hoped for, but at least I wasn’t alone.

On donation day, I walked to BU and felt my hands cool as my blood shifted to cower in my torso. Before the screening test, I suggested that I might do better lying down. “Oh, no,” the nurse replied, “This is just where I prick your finger.” Exactly. As she rolled my finger pad like a dough ball, I felt unplugged. Before the lights went out, I employed the Pinker Plan and threw the blinders on. It worked passably, which was all I needed.

At the donation table, I was joined by a Red Cross rep who knew my troubles and wanted to ensure I didn’t puke on the staff. Accompanied by a coworker, she introduced a blood drainage dream team consisting of a jovial nurse named Rose and her trainee. Then, after Rose snuck the needle in, the oddest thing happened—everyone stayed and watched. It felt like a preview of my wake, which was disconcerting, but wonderfully distracting. Plus, while fear is powerful, so is shame. Fainting with an all-female audience would have created entirely new issues.

I bled like a stubborn maple in sap season, but after 10 minutes, eight of which were spent telling me to relax, a sack of my blood appeared by my feet. I was so proud, I felt like I’d birthed the thing. Staring the bag down, I used the line I’d been saving all week. “Rose, are you a Steven Seagal fan? Because you can take that to the bank—the blood bank.”

Down a pint but adrenalized, I slurped rugged sips of juice and mauled a package of Lorna Doones. Stroking my beard, I turned to an adjacent couch, where a young woman lay faint and clammy with a damp towel on her forehead. “That used to be me,” I boasted with a cock of my chin. “It gets better.”

“This is my third time,” she wheezed. Showoff.