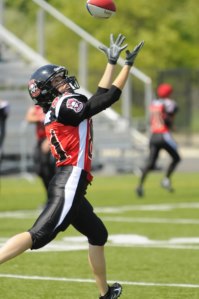 Speaking for men, I’ve always felt the core problem with watching women’s sports is that they seem like the cheap alternative to a more popular product. It’s a Hydrox, when I’d rather just have an Oreo. Please notice that (a) I didn’t disparage women’s sports, and (b) I dragged my entire sex into this column. So if the whole cookie analogy was offensive, yell at the nearest man, not the messenger.

It’s not a knock on talent. I know I couldn’t drive past Heather Mitts if she hopped on one leg and let me use my hands. I know Candace Parker would humiliate me on a basketball court, and not because she’s female, but because she can dunk and would do so on my face. But I know Kevin Garnett could do the same to her. That’s just the way it is.

Unlike soccer and basketball, football seems to exist outside the concept of equality as an activity that’s uniquely male, like Civil War reenactments, or farting. Women playing tackle football comes up every few years when a high-school girl petitions to play with the boys, or when the Lingerie Football League unleashes a media blitz. (Don’t forget the New England Euphoria home opener against the Miami Caliente on Oct. 2!)

Even that sentence looks ridiculous, never mind the image of wild bikini fury at the 50-yard line, but it represents all I knew about women’s professional football until earlier this month. Somehow, the Independent Women’s Football League, 1,600 women strong, has been off my radar. Founded in 2000, the IWFL has 41 teams spread across the country, from the Southern Maine Rebels to the Southern California Breakers. Our local Tier I team, the Boston Militia, plays at Dilboy Stadium in Somerville, and on May 16, I went to see the action.

For another point of view, I brought a woman with me. Her initial enthusiasm was underwhelming. “I think it’ll be as entertaining as the NFL,” she predicted. “And I don’t even like the NFL.” In fairness, she’s from Detroit, and they haven’t had many reasons to be excited about football lately.

With a program in hand, I scanned the names to see who sounded hot. (Not because I’m sexist, but because I’m childish.) What I found was every Ginger Snow and Roxy English was counterbalanced with a name seemingly focus-grouped for football. Nikita Payne? Mia Brickhouse? Mia Brickhouse sounds like a sentient being sent from the future to destroy football as we know it.

She’s actually really good, too. The whole team is, a fact immediately made clear when the Militia ran back the opening kick-off before Linkin Park had faded from the sound system. They quickly ran up the score to 19-0, at which point they faked the extra point and went for two, a deliciously diabolical tactic reminiscent of the 2007 Patriots. The Militia bring the pain on both sides of the ball, though, eventually shutting out the Philadelphia Firebirds 60-0.

With the local men’s teams losing their grip on dominance, it’s fun to watch a hometown squad massacre somebody again. But the real payoff is that these women are actually from your hometown. Wide out Ginger Snow is from Boston. Quarterback Allison Cahill, whom my companion called “a little lamb” but who throws more like a lady Doug Flutie, is from Uxbridge. And the Brickhouse family was cheering in the stands, no doubt thrilled to be beamed back from Rutland, post-Judgement Day.

With the uniforms on, you’re not hyperaware that the Militia is a women’s football team. They run fade routes, bells get rung and there was even a T.O.-esque excessive celebration penalty. “They’re clearly skilled, they clearly practice, but the most amazing thing is that they clearly do this just because they love football,” marveled my companion, before adding, “But they should have male cheerleaders.”

I don’t think I’d have the balls for the job.