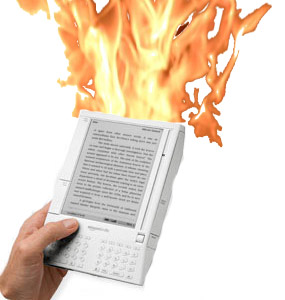 Light Me Up
Nick kindles his fears

When not hard at work, I like to sit back and relax with a tangible reminder of the impending death of my industry.

The Internet has changed the way we consume the written word, but thanks to portability issues and expense, readers still have to pick up actual books, newspapers and magazines (thanks, suckers!). But like the song I illegally downloaded says, “Times, they are a-changing.”

We now have products like the Cybook, Foxit eSlick, iRex iLiad and the current king of the hill, the Kindle. Economics is a giant catalyst. Newspaper and book publishing was a 260-billion-dollar business, with half that cash used for things like paper, ink and transport. By moving the medium digitally, the industry can save the equivalent of the GNP of Pakistan. The environmentalist in me loves the reduction in deforestation and fuel consumption. The economist in me wonders why I eat out of cans when I work in a multibillion dollar industry.

In order to understand my enemy, I went to the Boston Athenaeum, borrowed a Kindle and tried it in a place where millions of Bostonians may soon use it: rush hour on the T. My first concern was that I’d look like an asshole, but as commuters have a well-honed ability to ignore assholes, no one seemed to notice. The immediate benefit I found is that because the Kindle is so light, and flipping the page only requires a button push, you can easily read with one hand while blocking frottage with the other. Plus, as there’s no book cover, you can read the latest Nicholas Spark’s novel guilt-free. And as one ear-bud-sharing, emo-sing-along reminded me on a trip home, sometimes you need noise in order to concentrate, and the Kindle has plenty of space for MP3s.

There are a lot of cool features on the device—from being able to wirelessly download titles to a hilarious text-to-speech function. You haven’t lived until you’ve heard Stephen Hawking narrate a fight scene. Of course the biggest benefit is the size. I took the Kindle on a flight to South America, and the woman next to me spent hours reading a leather-bound Bible and audibly praising Jesus as we landed, and all I could think was, “Damn, that book looks heavy.” On the way back, as I read my compact Kindle with my arms at a polite width, the spindly man next to me spread out the beach towel of his broadsheet as his elbows slid like glaciers across the controls of my TV. I wanted to introduce my Kindle to his colon, especially when my nap was shattered by 180 decibels of football highlights, but it would’ve cost me about $260.

With a built-in dictionary and the ability to wirelessly Google or Wikipedia words, it’d seem that the Kindle has taken all the effort out of sitting in an armchair, but there are some issues. First, flipping through a text can be incredibly slow and frustrating. The newspaper is bad, but the thought of a digital textbook makes me weep for future generations of college students who’ll also drink and party and not read their textbooks. Making notes is a snap, but nowhere near as easy as just writing in the margins. Active reading ends up feeling insular and finite. In the future, I want to pull Robert Parker’s Rough Weather down from the shelf and show a friend he actually wrote the sentence, “She looked like she was receiving an Academy Award for stunningness,” not have that friend wait while I pull it up from a hard drive.

And, to be honest, the shelf is my hang-up. Yes, I like to pretend I’m a big, smart man with lots of novels on display, but I also like the way books look and feel. Have you buried your nose in a book recently? Those things smell great, too. And the dream is to see your name in print, not liquid crystal. For now, Kindle is convenient, yet the book still carries weight. But unlike glorious, rent-paying city magazines, they may not be around forever.