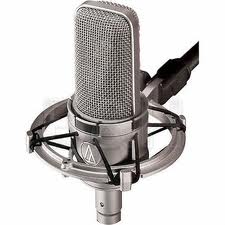 It’s natural to lie to yourself about your looks. My thinning hair makes me seem distinguished. See? It’s easy. And necessary. If every glance in the mirror coincided with a moment of honest self-awareness, the world would unfurl into chaos.

Your voice is a different story. It’s a trait you can hide from—until a phone message or home video shatters whatever auditory illusion you created. I wish I spoke like Donald Sutherland, but truthfully, I sound like I’m making Jell-O molds of my sinuses. Good thing I’m so handsome.

Speaking of delusions, I also believe in easy money and luck. Because of the former, I signed up for “Getting Paid to Talk: An Intro to Professional Voice-Overs” at Tufts’ Osher Lifelong Learning Institute (there’s another class on March 31). Due to the latter, on the same day I enrolled, I met Tom Dunn in a bar.

You may not recognize the name, but if you grew up around here, you know the voice. As our conversation turned to our professions, in lieu of a direct explanation, Dunn leaned over and whispered, “Promotional consideration for Sesame Street has been provided by.” For a second, I could feel myself in footy pajamas. “Whenever I say that to people your age, their stomach drops,” he explained.

For years, Dunn was the voice of Channel 2. Working with WGBH-TV, he often filled in for Robert J. Lurtsema, who, for the adolescent me, might as well have been the voice of the Almighty. Meeting Dunn was a sign, so I prodded him for guidance. “See a shrink and stay calm,” he answered. (Perhaps I’m only hoping he was still referring to voiceovers.) He also recommended I practice by reciting ad copy, as it’s often well-written and direct. When the day for my lesson arrived, I walked to campus repeating something about the quality of Absolut vodka, mindful of Dunn’s advice to learn where my voice might fit in the field.

While he offered staid leadership, instructor John Gallogly was all vigor and exuberance. Gallogly is the creative director of Voice Coaches—what he intimidatingly described as “the Harvard of Voice Acting”—and with his buzzed head, jeans and untucked shirt, he looked like a bouncer in a tweed jacket. (Appropriate, as he had just taped a cage fighting commercial earlier that day.) I wasn’t sure what to make of him at first, but after I learned Dan Castellaneta vouched for his program, I relaxed. Homer Simpson’s stamp of approval is all I need.

We spent most of the class breaking down the money in the industry—$11.7 billion was spent in the voice-acting business last year, a 7.5 percent increase from 2008. A lot of that cash is doled out in four- to five-figure increments to professionals doing about 20 minutes worth of labor. Nice work if you can get it.

But could I? Audibly, I don’t think I could sell anything. It’s hard for me to express excitement without the benefit of an exclamation point. Thankfully, commercials are only 10 percent of the business. The rest is narration, in the form of products like instructional tapes, public address announcements or video games. I couldn’t sell you a car, but maybe I could play an irritating citizen/shotgun fodder in the next Grand Theft Auto. Gallogly saw this latent talent. As I walked to the mike to record an ad for our voice test, he said, “I want you to be sarcastic. I have a feeling you can do that.”

Apparently quite well, at least according to Jenny Marcotte, Gallogly’s studio director. While currently figuring out whether Matt Damon or Jeff Bridges is going to narrate her next project, she took the time to evaluate my voice. Seems my vocal tone was made for humor and sarcasm, “but not upscale sophistication or sensuality—or children’s books.” So sleepy slacker, yes; sexy with kids, no. I can live with that.

Surprisingly, Marcotte suggested work in audio books. Such a heavy dose of my voice could probably double as a sleep aid, but 700 words at a time sounds about right. Maybe the role I was born to play is me. Then again, “Nick & Choose” as read by Donald Sutherland would blow your mind.