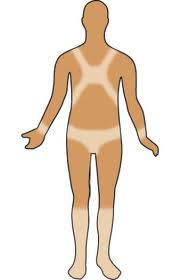 I officially retired from the sun last spring. For safety’s sake, I decided I’d had my share of tans, I’d had my burns, and it was time to embrace a life of permanent French vanilla.

My girlfriend decided she wanted to see something in a russet or raw sienna.

The impetus was the curiosity of her friend Kate, whose skin tone would be the envy of all social circles, were these medieval times. She wants to live life in the Bronze Age, but when the summer comes, heredity has her slathering on SPF 85. That’s a level of protection I didn’t know existed until we found ourselves chatting in a waiting room, mentally preparing for $40 spray tans. We were at Perfect Tan, a location chosen both for its reputation and immediate availability, giving me no chance to weasel out.

I can’t say my pale arm was twisted, but my girlfriend was definitely the driving force, and, as she tagged along to see the show, I began to suspect her motive was more about comedy than cosmetics. “Please go aggressive with it,” she half demanded, before digging through the tan-line stickers. I looked to Kate, who was filling out the release.

“Are you allergic to sunlight?” “Well, sometimes I feel sick if I’m out in the sun for a while.” She paused. “I’ll check in the middle.”

There was no help to be found.

Surprisingly, I found the process itself rather enjoyable. Once you’ve stripped down to your briefs, you step into what looks like a giant futuristic phone booth, and a bizarre game of Simon Says begins. Through a variety of poses, an attendant sprays all your nooks and angles with two coats of a mixture containing dihydroxyacetone. DHA interacts with the acids in dead skin cells, turning them brown, and has no proven toxicity. (Sure, it may be a chemical developed by German scientists before World War II, but seriously, don’t sweat it.) Finally, with the what-the-hell attitude of a dieter ordering dessert, I opted for an additional third coat, then stepped out in front of a mirror and laughed my ass off.

Things were less funny the next day. With bronzer coating my skin and setting off a panic in my mind, I looked like something that had crawled out of a used cigarette filter. But as the additives circled the shower drain, the angst faded a bit, and I figured that, like a drastically new haircut, this was something I’d have to own if it was going to work.

And like a new ‘do, there are pluses and minuses, a fact made clear when my coworker Andrew came by with his normal morning greeting. “Hey, how’d the—OH MY DEAR GOD.”

Not a huge shot of confidence. Continuing the haircut analogy, there’s no way to hide the fact you’ve just been spray-tanned, and I imagine he’d have found a mohawk less shocking. Initially more charitable, our assistant editor remarked, “If you told me you just got back from vacation, I’d say, ‘Sure.'” She then added, “Because I wouldn’t guess, based on the way you dress, that you’d go tanning.” Thanks?

Day two brought drastic changes, as my new hue, hiding in plain sight, became invisible. In fact, people accused me of scrubbing off the results, but a quick shot of the tan lines silenced any doubters. And though, with my face to my forearms painted one uniform shade, things didn’t look fully natural—I felt more dirty than tan—I began to embrace the positives. Muscles pop. Skin (incorrectly) appears healthier. An approximation of the superficial look you want can be had then forgotten over the course of a week.

Kate’s boyfriend, Matt, summed up the situation best. On day two he was relieved to see that the “Lindsay Lohan glow” had faded. By day five, he’d moved onto more important matters. “When I was in high school, no one ever mentioned you could make money spraying down naked women.”

As for my tan, only the eroded scraps remain. And I miss it like a sucked-down strawberry daiquiri. It’s a summer treat I feel lightly ridiculous enjoying. But when it comes time to hit the beach this year, though I may not always be comfortable in my skin, I resolve to be comfortable with my shade.