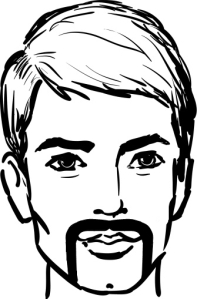 The beard is for the solitary man. The look is tough and rugged, worn by men of the earth—the lumberjack, the sailor. Yet the beard is a mask. The beard is for the guarded, the quiet. The beard is a shield. It’s a cowboy hat turned low over the eyes. It’s Jack Nicholson’s sunglasses. A man’s beard asks a stranger to notice his appearance, and to please quash any urge to strike up a conversation. The more isolated the man, the longer the thicket: a monk’s whiskers impress, a hermit’s beard is nonpareil. But the beard is good company, a faithful pet to scratch. I’ve grown a few in my day, and each time I raise the clippers to shear my face, I feel I’m about to harm something innocent.

My winter beard had overstayed its welcome, and my girlfriend, Susan, had started making subtle hints that it was time to shave. I’m good at ducking subtle hints, but once it became a birthday request, I relented. A lover of fools, she asked that I keep a mustache for her party. Out of curiosity and revenge, I left it on my face for more than a week.

For both our sakes, I avoided the tired pedophile jokes and went with the horseshoe mustache, a favorite of bikers and Sam Elliott. Unlike the beard, which can act as a social cattle-catcher, I found a mustache invites friends to openly comment on your appearance. “Very Dukes of Hazzard,” said one pal. “You look like you’re about to do something indecent,” said another. The general consensus after an hour or a beer, was that the look succeeded.

Counterinuitively, silence was agony. Around strangers, at the gym or on the street, people can just assume you’ve lost a bet or happen to be a big Freddie Mercury fan. It takes a brave man to flaunt an assertive mustache.

But while beards are for loners, donning a mustache initiates you into a brotherhood. On day two of my experiment, Susan and I shared a table at a snazzy restaurant, my furry horseshoe announcing its presence among the suits and Châteauneuf-du-Pape. In a brief, beautiful moment, I locked eyes with a waiter clearing dishes. Beneath his nose grew a majestic handlebar fit for a vaudeville star. We froze, then shared a quick nod of mutual admiration. “That was so strange,” said Susan. “It’s like you’re in a club.”

The following day we stopped for pizza. The cashier, sporting a mangy slug of hair on his lip, charged Susan $2.50 for her slice. He then pointed at my face and declared, “His is free.”

This sort of support is lovely, but in pensive moments I would reach for my chin, forgetting I’d lost the comfort of stroking my beard. In desperation, I’d twist the wispy ends of my horseshoe, like an adolescent fondling the tattered rags of a treasured security blanket.

There are rough moments with a temporary ‘stache: the sideways glances, the coworker who plainly states, “I hate your face.” And there is the nightmare scenario I created by carrying a six-pack of cheap beer, a powder keg ignited by one slanderous spark: “You look like such a hipster.” From there the shots kept falling. “How’s that all going to fit on your bike?” “Yeah, go back to Jamaica Plain.” I ran from the room suffering the type of anguish only Morrissey could understand.

Life with a mustache is an odd experience, as the world reacts to a patch of hair you tend to overlook. It’s like walking down the street with your fly down. Your friends will tell you truth, but strangers may get uncomfortable.

On my mustache’s last night, I put it to a final test. Turning to two women in a bar, I asked, “Does this look work?”

“Yes,” said the other, and both walked away wearing equal looks of disgust.

Dejected, I spun back toward the bar to find a fresh shot of whiskey. “What’s this for?” I asked my friend.

“From behind the taps, the bartender motioned to his mustache and bobbed his head in approval.

Cheers to the gallant mustachioed. Maybe one day I’ll rejoin the ranks.