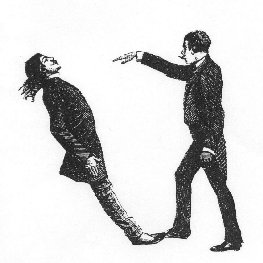 Friday, 11:10 am. I’m writing this opening at a three-day journalism conference as an exercise in a class on the personal essay. These words are the result of both a minor assignment and an attempt at a major life change.

I’m an expert procrastinator. Given an hour to complete a 60-minute task, I’ll get the job done on time. Given an entire day for the same assignment, and I will fill the empty space like foam sealant. As I prefer to write at home, my apartment is spotless, because how can you write a snappy simile when the ceiling fan needs dusting? But in the past five minutes I’ve completed the first 103 words for an 800-word column due four days from now. Change is afoot, and hypnosis was my first step.

I should have a healthy distrust of hypnotism. Four years ago, a teacher tried to mesmerize me to greatness. (Continued at 11:50 am, as another assignment.) I never felt I was susceptible to the process—I was too strong, I supposed—but one day after class, he locked my eyelids shut with the power of words. At the start of our sessions, I was excited with this promise of something new, but things quickly deteriorated into nighttime phone conversations in which he prompted me to bark like a dog, and an incident that found my roommate trapped in a bathroom with a bag of this man’s dirty underwear. But I still have a cautious optimism. (Edited at 8:15 pm, when I’m usually drinking.)

Sunday, 4:26 pm. Despite the uneasy introduction, I thought hypnotism could help boost my productivity by reprogramming my instinct to stall. So I turned to Avinoam Lerner, a multi-discipline healer in Newton. He’s got a lean, sculpted face, non-matching eyes and the voice of an Israeli Garrison Keillor. He’s the image your mind conjures of a man capable of molding it. But before we met, I put his work to the test and downloaded his Pure Relaxation program for a red eye back from Denver.

It took me three listens to consciously hear what Lerner says toward the end of the 19-minute program, because I kept falling asleep. The beginning is amusing, as he warns against listening while operating heavy machinery. In the middle, there’s what you might expect: soft music, counting, commands to focus on his voice and to let outside noises lead you deeper into relaxation. So there, in a dark cabin somewhere above Iowa, amid the coughs, hums and smell of diapers, I escaped. Stirred awake at the end of the recording, I felt light and hollow, like a Nick-shaped bunt pan floating on a fountain of air. Whether it was Lerner’s words or the 90-minute nap I snuck in before work, it was the most energetic post-red-eye weekday I’ve ever had.

Monday, 8:45 pm. Four days later, I visited Lerner for a more directed, personal session. He has a small office, muted and clean with a portable radiator set to soothe. There’s a letter of commendation from the mayor of Newton on the wall, and with no bag of skivvies in sight, it became even easier to unwind.

Lerner describes the hypnosis process as cutting the connection to your inner critic. You want to lose weight, but your inner critic says you’ll always be fat. Hypnosis lulls that voice to sleep so the positive thoughts can be planted while the defenses are down. The key is you have to want to believe.

After some preliminary relaxation, I sank in a chair, my eyelids sealed, ready for my procrastination instincts to be rewired. “I want you to picture someone in your life who doesn’t procrastinate,” Lerner instructed. “And when you have someone in mind, I want you to raise your finger.” The notion shook my trance, as I don’t tend to associate with go-getters, but my mental Rolodex eventually coughed up a serviceable option. Next, he told me to envision walking up a staircase, at the top would be a room, and in the room would be a book. If I believed the solution to my problem was inside, I should raise my finger. I blanked, I stalled, and in the end, I lied with the lift of a digit. But then, as if my finger flicked a switch, the answer came to me.

It’s really all about trust. I don’t trust the right words to come, so I give them as much time as possible to arrive. (For example, it’s now 11 pm.) Perhaps the teacher in my Friday class was on to something when she said you can outrun your own inner critic if you write fast enough.

Or maybe I’m not lazy; I’m just busy. Maybe I’ve just adapted to what works best for me. As writer Walt Harrington told a Saturday seminar, “Deadlines focus the mind.” Or perhaps I’m just indulging in self-delusion for the sake of convenience. (Then again, I wrote those three sentences on Saturday.) But in the end, like hypnotism, I think the key to change is to be open to influence.